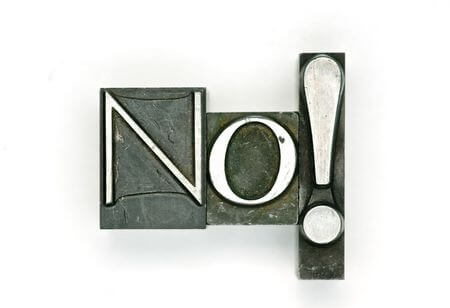 How good are you at saying “no?” It’s a fascinating subject to me. This is probably because I’m still a work in process when it comes to being 100% comfortable saying no. One way to look at saying “no” is from the standpoint of you as the individual declining a request or setting boundaries. For example, here are four different ways to say no and still keep your job. And one of my most popular posts is about how saying “no” elevates your integrity.

You can also look at saying “no” from the vantage point of the person on the receiving end of that “no.”  Their reaction provides telling information about your relationship with that person. I heard a fascinating interview with Shonda Rhimes, the exectutive producer and head writer for three popular American TV shows, including “Grey’s Anatomy.” In her Fresh Air interview with Terry Gross, Rhimes admitted to being worried about saying “no” to people. She even went so far as to write a script on a sticky note and affix it to her computer screen. Interestingly, as she got better at saying no, she discovered something powerful:

But I also found it wildly freeing once I started doing it because once you start telling people no—and their reaction always tells you, A, who they are and, B, what situation you’re in. You know, if you say no to somebody—[for example] somebody asks you for a ton of money and you say no to them and they respond with vitriol and hatred, then you know exactly who they are.

Think about this for a minute. Many people invest a lot of time worrying about what might happen if they say “no.” They build up all sorts of worst-case scenarios. Their fear makes them say “yes” when they should really say “no.” Rhimes has found (and I have, too) that often the worry is misplaced. And, if the worst case does happen, well, you know where you stand. It’s not so much about you, it’s about the other person and their willingness to be gracious about your response. Everybody has the right to say no.

I think Shonda Rhimes’ way of dealing with reactions to “no” is healthy. Rather than taking on the other person’s negative energy, she sees it merely as information to help her assess her situation and the person with whom she’s dealing. The next time I worry about saying “no”, I’ll keep this viewpoint in mind.