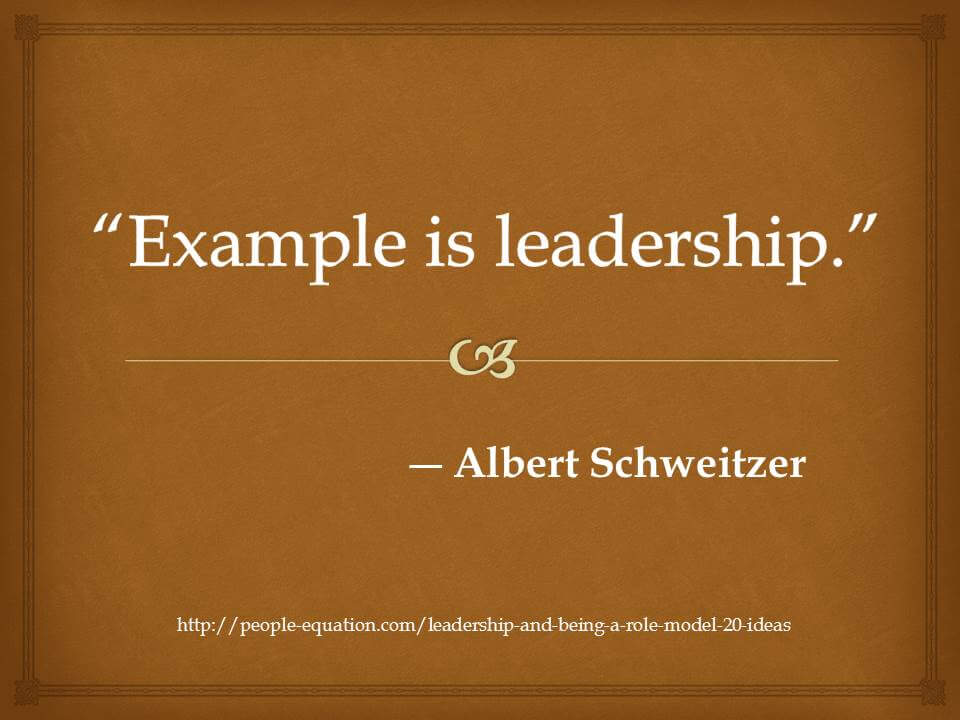 At one time or another, we’re all in a position to lead. We’re parents, teachers, coaches, managers and committee leaders.  As such, we know that setting a good example is an important part of leadership. But it’s not always easy. There are role modeling saboteurs lurking, ready to thwart our best intentions to set a good example.

For a bit of inspiration, here are 20 quotes about being a positive role model and setting a good example.

“Being a role model is about being true to myself.”

“A person always doing his or her best becomes a natural leader, just by example.”

“Imagine for yourself a character, a model personality, whose example you determine to follow, in private as well as in public.”

― Epictetus
“Look at people for an example, but then make sure to do things your way. Surround yourself with positive people.”

“If there is such a thing as good leadership, it is to give a good example. I have to do so for all the Ikea employees.”

“A good example is far better than a good precept.”

“I always try to teach by example and not force my ideas on a young musician. One of the reasons we’re here is to be a part of this process of exchange.”

“Nothing is so contagious as example; and we never do any great good or evil which does not produce its like.”

“Children have never been very good at listening to their elders, but they have never failed to imitate them.”

“Find someone who has a life that you want and figure out how they got it. Read books, pick your role models wisely. Find out what they did and do it.”

“Leaders are more powerful role models when they learn than when they teach.”

“I think the best role models for women are people who are fruitfully and confidently themselves, who bring light into the world.”

“My mother once told me, when you have to make a decision, imagine the person you want to become someday. Ask yourself, what would that person do?”

“If our words are not consistent with our actions, they will never be heard above the thunder of our deeds.”

“A true leader is a person whose influence inspires people to do what is expected of them to do. You cease to be a leader when you manipulate with your egos instead of convincing by your inspirations.”

“If your actions were to boomerang back on you instantly, would you still act the same? Doing to others an act you’d rather not have done to you reveals a powerful internal conflict.” ― Alexandra Katehakis

“Kid’s don’t care how many sermons you preach to them. The only sermon they’ll hear is how you live your life in front of them.”

And finally, because I can’t resist the jibe of a brilliant satirist:

“Few things are harder to put up with than the annoyance of a good example.”